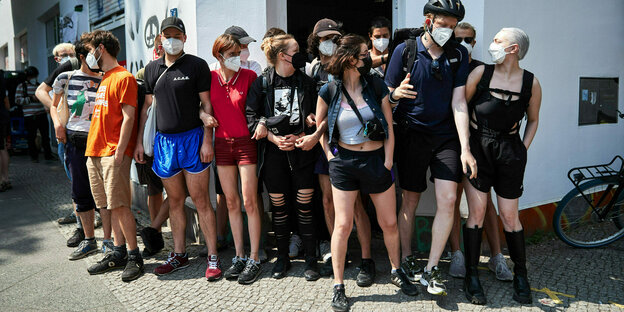 Instant access to products of consumerism without moving from your couch? Delivery services are building their business on this and have expanded a lot especially in times of the pandemic lockdown. People, mostly BIPoCs, driving around on bikes with colourful backpacks and jackets. Platform capitalism, a way of making business by connecting sellers and buyers – faster, at any time of the day, from door-to-door.

Behind these newest business lie the newest forms of exploiting workers. Flexible as in unreliable, here and there, couple-of-hours underpaid shifts or 12-hours-shift cycling on your bike in temperatures below 0 degrees. A control over workers through their tracking of every movement is inherent to the app the need for work. Working-times that go beyond the usual opening hours of a supermarket. The company has not only been criticised for the bad working conditions, but also for using publics paces for their mobile storage vans. Nonetheless, the business is expanding and now opening a franchise in Berlin-Neukölln. Surely, Friedrichshain is soon to come. All this is made possible by a city, that has come so expensive that many people migrating here are forced to take shit paying jobs and work off their asses in order to make a living. Bilungal apps make it possible for non German-speaking people to get a job, whereas the translation services is limited to information to make them work, however not teaching them about their rights.

Against this, workers from Gorilla have self-organised and engaged in strikes and blockades in the past weeks. This has been initiated as one worker was sacked for being a couple of minutes late. However, the workers do not just stand up against their shitty working conditions, but an entire burocratic war that is waged against workers in this country as worker struggles are mediated by legal frames and existing workers unions.

We stand in solidarity with those that fight against capitalist exploitation. Those that chose to self-organise and reject forms of representation. We feel encouraged by the courage and the risk that the gorillas riders are taking. Who besides the precarious working conditions and the threat of being fired they are detarminate and not afraid to take it up with this company. They are an actual example of what we can achieve through self-organisation.

For more self-organisation in schools, bars, camps, universities and houses!
Solidarity with the gorillas workers and all workers fighting against the capitalist system! Support their calls, connect the struggles!