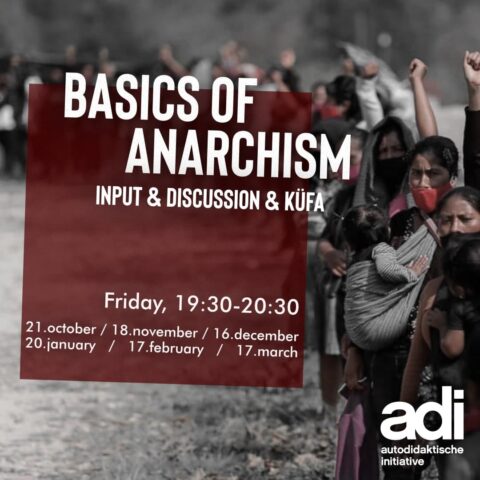 Anarchism is a global social movement, set of practices and political theory with a tradition since about 200 years. Everybody knows the circle-(A)-symbol, has some vague ideas about alternative lifestyles and direct actions. And of course you heard prejudices about anarchists, for instance that they are naive dreamers, infantile negs or demonic slobs. But what is anarchism actually and what does it really stands for?

In a monthly series of six focused inputs you will learn some basics from history, ethics, political theory, strategies and perspectives of anarchism. You are further more invited to discuss about those insights and get together with your sympathies.

Dependent on the gathered group, we will talk in english, german and/or translate from on to the other language.

We will start around 8pm (20 Uhr) shorty after respectively parallel to the peoples kitchen 7pm (19 Uhr).

#1 the origin of anarchist movements

The anarchist movement originated around 1840 as one of the three main currents in socialism, beside social democracy and party-communism. One of the essential questions by developing anarchism was the relation to the state, perception of politics and the emphasis of parallel structures for social transformation.

Anarchism is a complex set of a specific ethic, organizational principles and assumptions in political theory. Although different persons emphasize varied aspects those spheres belong inseparably together. Therefore anarchism can be distinguished from „just“ subculture and ethical lifestyle, „just“ a political theory against all forms of domination and „just“ a libertarian-socialist wing in social movements.

#3 anarchist currents, controversies and the strive for autonomy

Sometimes its complicated to encompass anarchism, because for outsiders it looks partially incoherent and even contradictory. The main reason for that is the inherent plurality of anarchism, resulting in different currents with own schools of thoughts, publications, groups and traditions. The most known are anarchist individualism, communism and syndicalism. But there is also a mode that bounds those differences together: this is the strive for autonomy.

Anarchist ideologies and strategies generated in demarcation of political reform and political revolution. So the transformational concepts of mutualist selforganisation, insurrection, subversion, mass movements and social revolution were developed. How can comprehensiv, long-lasting and radical change be achieved from an anarchist perspective?

What since a while is generally known as „intersectional approaches“ turns out as a genuine anarchist way of thinking: To overcome domination at whole means to interconnect different dimensions of dominating societal relations and their replacement with solidary, voluntary and equal relations, which are already there.

#6 anarchism in the 3rd millennium

When cold war ended after 1990 and within the anti-globalisation-movement around 2000 it was announced that anarchism offers the only credibly revolutionary inspiration that remains. Although its true that social democracy was corrupted by neoliberalism, party-communism became a totalitarian doctrine, social movements split into one-issue-aspirations and radical leftists became paradoxcially defenders of the bourgeois society, anarchists could not reclaim these place yet. But exactly therefore we should ask, which place anarchism gains today.