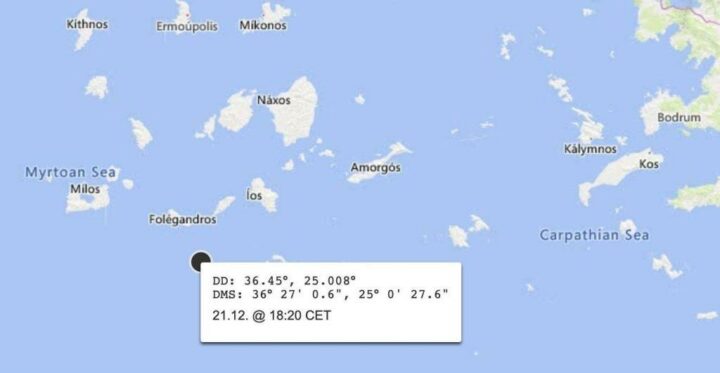 Between 21 and 25 December 2021, the Alarm Phone has been alerted to three deadly shipwrecks in the Aegean. At the same time the Hellenic Coast Guard continues its violent pushback regime – we witnessed one boat being pushed back from Chios into Turkish waters on the day of Christmas eve, most probably not the only one in these days.

In the evening of 21 December 2021, the Alarm Phone was informed about a boat in distress in the Aegean Sea (AP914). A relative told us that there were around 60 people on board, that water was entering the boat and that the boat was sinking. We immediately informed the responsible authorities about the emergency near the small Greek island Folegandros. According to information received by the Hellenic Coast Guard, 13 people were rescued, one of them after surviving 24 hours in the water. Tragically and as mentioned in our report about this tragedy, this means that still an unknown number of people are missing (1). There was contradictory information about the total number of people who were initially on the boat, differing between 32 and 60. Three dead bodies were found, at least 17 people remain missing.

A day later, on the early evening of 23 December, relatives informed us about a group of people stranded on a small rocky islet near the Greek island Antikythera (AP925). At the time, media had already reported at least four dead passengers (2). Between 90 people were stuck on the islet and had to spend the night there. On 24 December, the Hellenic Coast Guard confirmed that 90 people were rescued off the islet (3) – according to information at that time, 11 dead bodies were found. In a video of the rescue operation, one could see the rest of the sunken vessel. Equally visible on the video were orange life rafts to transport people from the islet to the vessel of the Hellenic Coast Guard (4). The same life rafts are usually used in brutal pushback operations that leave people adrift at sea – a practice used by the very same Hellenic Coast Guard. Up until now, it is reported that 90 people (among them 52 men, 11 women and 27 children) have been rescued. 11 people lost their lives.

While Europe was getting ready for Christmas Eve on 24 December, the next emergency call came in. A boat with 88 people was about to sink near the Greek island of Paros (AP930). The people reported that they were already in the water (5). Again we immediately informed the Hellenic Coast Guard and asked for rescue. They informed us that a rescue operation was under way. Also the Blue Star Ferry of the Attica Ferry company changed their course and went to the distress location – in total, nine boats were reported to be involved in the rescue operation (6). People had to be rescued out of the water. At around 23:00 CET, 58 people were rescued, while 6 dead bodies had been found (7). During 25 December, the death toll rose to 16. Again in this case, many relatives reached out to us, asking if their loved ones are among the survivors.

Until today, many questions remain open regarding all three shipwrecks: Was a rescue mission launched in time or was it delayed? Could these deaths have been prevented by a more immediate reaction of the responsible authorities? And why did the boat near Antikythera have to land on the small rocky islet and was not directly rescued?

Again, dozens of people have died on the Aegean route despite being close to shores. Such tragedies are the direct result of the violent pushback regime put into practice by the Greek government and in the name of the EU. All three ships that sank were on their way from Turkey to Italy. This very long and dangerous route is increasingly taken by more and more people. They often sail in boats, which they cannot properly steer, and get into serious distress. What is striking: while the Hellenic Coast Guard is always quickly on scene to violently push people back, they are much slower in case of distress. The combination of a brutal pushback and inhumane camp regime in Greece leads to many people choosing this longer route from Turkey to Italy.

We have witnessed one of these reasons in the early morning of 24 December. The Alarm Phone has been informed about a group that has been pushed back by the Hellenic Coast Guard near the Greek island of Chios (AP927). The people were picked up from the sea, shortly detained on Chios and then pushed back and left adrift in Turkish waters. When calling the Turkish Coast Guard in order to find out if the group had been rescued, they informed us that in the morning of 24 December alone, 8 groups have been “collected” in the Aegean sea and brought back to Turkey. This lets us assume another massive pushback operation by the Hellenic Coast Guard on the morning of Christmas Eve (8). While there were potentially not sufficient assets available to rescue people in severe distress in other regions, there were sufficient capacities to perform pushbacks at the same time.

It is very clear: During this journey, the Coast Guard is often not a potential rescue, but rather a danger to people on the move.

In addition, the Hellenic Coast Guard already mentioned “smugglers” being involved. This usually refers to their attempt to criminalise passengers for boat-driving. This is another practice used to conceal the real crimes in the Aegean: the pushback practices and the violent and deadly consequences of the European border regime at sea and on land.

For the moment, it is of utmost importance – especially for the authorities – to support relatives looking for their loved ones.

Only open and safe routes towards Europe will prevent such tragedies in future, which is why the Alarm Phone continues to struggle for safe passages and freedom of movement. Our thoughts are with the survivors and with the relatives and friends who mourn their beloved. We will never forget them.